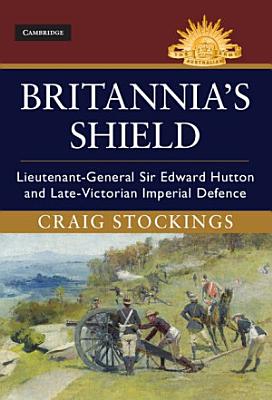 Britannia's Shield: Lieutenant-General Sir Edward Hutton and the Late-Victorian Imperial Defence presents an in-depth, international study of imperial land defence prior to 1914. The book makes sense of the failures, false starts and successes that eventually led to more than 850,000 men being despatched from the Dominions to buttress Britain's Great War effort – an enormous achievement for intra-empire military cooperation. Craig Stockings presents a vivid portrayal of this complex process as it unfolded throughout the late-Victorian Empire through a biographical study of Lieutenant-General Sir Edward Hutton. As a true soldier of the Empire, the difficulties and dramas that followed Hutton's career at every step – from Cairo to Sydney, Aldershot to Ottawa, and Pretoria to Melbourne – provide key insights into imperial defence and security planning between 1880 and 1914. Richly illustrated, Britannia's Shield is an engaging and entertaining work of rigorous scholarship that will appeal to both general readers and academic researchers.

Authors: Gerard Carruthers
Categories: Literary Collections
Literature and Union opens up a new front in interdisciplinary literary studies. There has been a great deal of academic work—both in the Scottish context and

Catalogue of prints and drawings in the British Museum

The Dawn of the XIXth Century in England

Transactions of the Historic Society of Lancashire and Cheshire for the Year ...

Authors: Historic Society of Lancashire and Cheshire
Categories: Cheshire (England)
List of members in each volume.

Caricature History of the Georges